Does “free country” mean you don’t have to wear a mask in stores? 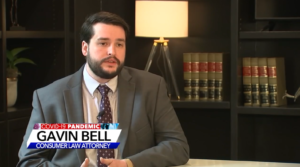 The Centers for Disease Control and Prevention advises Americans to wear cloth face coverings in public, especially those in areas with significant community-based transmission.

That is not a legal mandate but some businesses are requiring masks.

Recently, at one of the company’s Colorado stores, a man protested the policy and lashed out an employee who asked him to put one on.

“I’m not doing it because I woke up in a free country,” the customer said.

Raleigh lawyer Gavin Bell shook his head as he watched the video.

The consumer law attorney noted the customer’s reference to America being a free country.

The section of the CDC website that offers guidance on COVID-19 has changed a little.

“People often like to throw around the term ‘free country’ without really thinking about what that means,” he said.
What it means, Bell added, is that businesses also have freedom to set their own policies.

“He is free to not wear a mask and Costco is free to ask him to leave,” he said.

Halfway through the 36-second video shot at the Colorado store the employee begins pulling the cart away as the customer says: “So you’re going to take this cart from me?”

As we all work to prevent the spread of COVID-19, it is good to know the best practices while wearing face masks.

The employee replies, “Sir, have a great day. You are no longer welcome here in our warehouse. You need to leave. Thank you very much.”

Bell was impressed by the employee’s calm reaction but says when the customer posted the video on social media, it backfired.

“A lot of the public reaction has been aimed at the customer being the one who acted outrageously not the store,” he said.

“He’s free to go to another store and sort of let the free market sort things out,” Bell said. “If one store wants to be a little more lax and that’s going to drive up their business, then they’re free to do that.”

Conversely, Bell said, some stores might become more stringent with requirements in the hopes of touting the safety of their stores to attract more customers.

The only policies businesses can’t make are those aimed at specific individuals or groups, Bell said.

“They can’t discriminate against patrons based off of their race, their national origin, their religion or any other classification like that.”